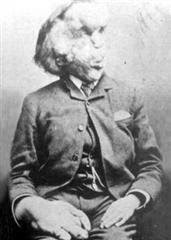 Mandy Sellars although physically disabled due to Proteus Syndrome wishes to help human beings & she has found a job for her self after a long struggle .Thus we should all admire Mandy for her courage.
Posted by Moksh Gupta