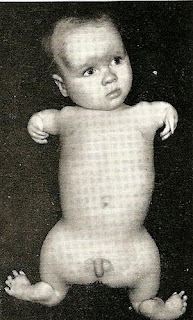 Certain drugs administered in therapeutic dosage to the mother during the first 3 months of pregnancy may also be responsible for fetal malformation.The wide spread use of Thalidomide
in Germany & Britain led to birth of infants showing severe deformities of the limbs.As a result proprietary preparation of Thalidomide has been banned in Britain.
Posted by Moksh Gupta

I've read about this. Teratogenic drugs and medications including thalidomide have been known to cause serious and sometimes fatal birth defects.